For more sizes, see this link.

I'm sure this is what you've all been waiting for . . .  I'm just certain it will change your life . . . how about an authentic, free, SIMPLE sun-bonnet pattern from Godey's Lady's Book?  Aren't you just giddy?  (Let me tell ya, I was just giddy when I think I figured out what "filling it in" meant.)

The bonnet calls for some gathering, but you can actually make it without gathering for about the same look.  It also calls for "cotton wick yarn" cords to stiffen it, but I just used interfacing.  Here's how you can make a simplified version:

1.  Download the pattern, print it, tape it together, and cut it out.  (I drew this out in Excel, so when you cut it out, just curve the lines best you can.  I'm sure there's good pattern drafting software out there, but this is all I have!) 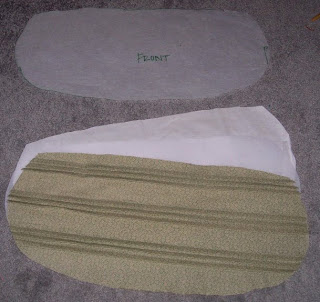 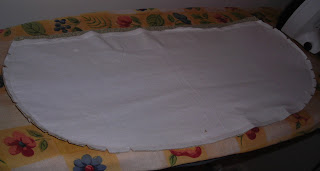 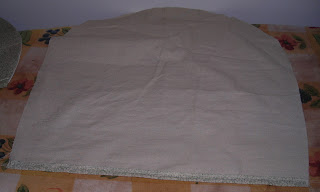 5.  Make your ties.  Fold in half lengthwise, stitch one short end and along the long end 1/4".  Clip corner, turn, press.

6.  Attach the crown to the front. Start pinning the bottom of the crown to the bottom of the front, right sides together.  Work your way up equally to the center. You see you have a bunch of excess fabric at the top.  Just flatten it out evenly on either side of your center.  You're creating a pleat at the top center back of the bonnet.  I think this is what they mean by "filling it in," well at least it's got to be close. 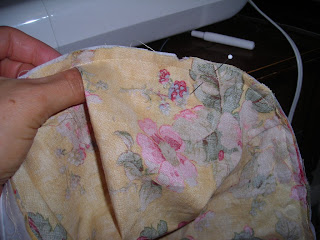 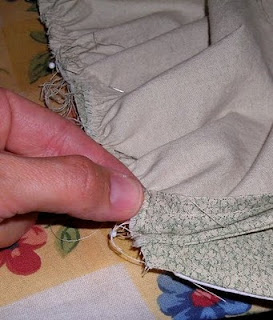 8.  Turn right side out, tuck your raw edges into your front and hand-stitch your lining down. 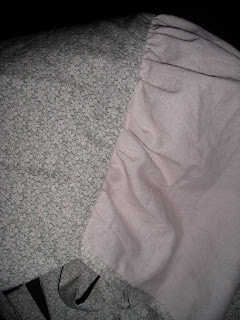 11.  Attach your front/inner ties.  I placed them about at the back of my jaw.  If you put them much further back, you feel like you are going to choke.


-----
Just for fun, here are my "sewing adventures" with this one.  Somehow, the diagram, written instructions, and picture don't match up.

Here's what happens when you cut out the pattern according to the diagram and the written instructions:  "Measure from just below the ear across the head, and allow your cloth to be twice the length."  If you do it this way, the front is waaaaay too long and looks nothing like the finished drawing.  I think maybe it meant twice the depth to allow for runners (see below), or maybe it was twice the length so you could cut it in half for the facing. 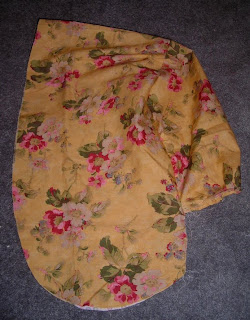 I also tried to "measure from just below the ear across the head" (but not double it), but then the finished product looks a little small.  The diagram indicates 23" wide for the front, but my grid paper would only work to 21", which I think looks great. 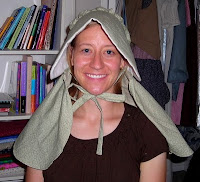 If you want to cut your front out bigger to allow for runners, you can do it like this:
If you sew your "runners" or tucks or pleats or whatever you want to call them on the front pattern piece as it is drawn out, you reduce the front size considerably as is shown below.  So, I think when the pattern said to "allow your cloth to be twice the length," maybe it really means twice the depth to allow for all those runners. 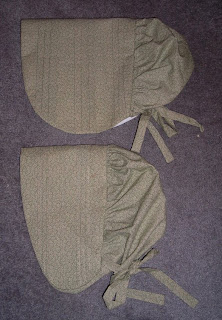 Have you noticed, too, that the original drawing has more of a square front, whereas the bonnets I made following the diagram end up with more of a rounded side-front?  I guess it's your preference.  The more rounded edge is easier to see out of; I like it better.
On my first try, I figured I would gather the crown just like every other bonnet pattern, however, after I re-read the instructions, I realized they did not say to gather. That's when I had to figure out what "filling it in" meant.  Gathering could be an option, though (see the green bonnet above).


Now I hate to admit it, but when I saw that the crown pattern-piece was quite a bit longer than the 23" front (or 21" in my case), I cut off the bottom part of the crown to make it shorter.  However, this is what happens: 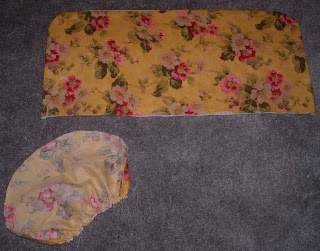 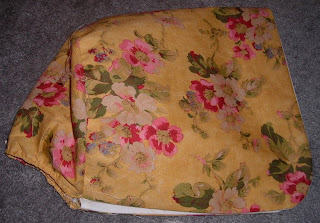 You lose the back length of the crown!  Duh!  I know this one.  It's just like a sleeve, you know how they are rounded at the top?  You need the excess fabric up at the top to push the fabric down so it ends up where it should be at the bottom!  If I had any knowledge in pattern drafting, I would have caught this one.

The original pattern says to "gather [the crown] in a little at the neck and bind it."  In some of my versions I did this.  If you don't want to gather, though, you can just run a piece of embroidery floss (or other thick thread), through your finished bottom edge by anchoring it at one end, feeding the needle through your hem, then pulling it out and anchoring it again.  When you gather the bottom of your crown a little, the small cape fits just right.  In the directions I give above, I've eliminated this gathering step to make it easier.  Because you're not gathering, you need to modify the cape -- which I have done in this pattern. 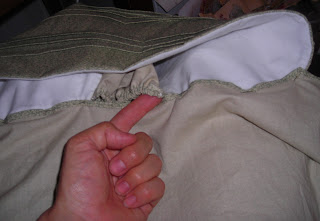 Playing with the cape.
Here's how I modified the original cape pattern to fit this simplified bonnet tutorial (without gathering at the neck). 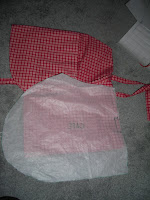 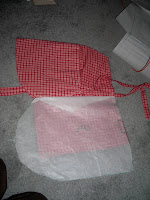 I made this red bonnet for a girl who's going on trek.  She didn't want the cape so long, so I made a shorter, square-cornered cape. 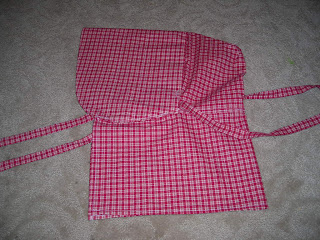 So how many of these bonnets did I make initially?  Well, the 4 you see here, then I ran out of interfacing, so I had to start unpicking versions.  I did that twice.  So you could say it took me 6 tries to get it right.  Well, maybe not right, but the best I could do with the knowledge I have!
Posted by Emily at 9:44 PM

Thank you so much for publishing your tutorial, including all your mistakes. It will make doing this very much easier.
I couldn't get the pdf to save, but I was able to get a screen shot and piece it together in paint.

Thank you so much for sharing this! I made a bonnet already with your pioneer bonnet tutorial, but really wanted to make one that was more "authentic". I had seen the picture for this one, but had no idea how to recreate it and didn't want to pay for a pattern. I was able to use the pattern and your descriptions of your experience to make a version of my own. To simplify it further, I made the cape and crown pieces all one piece. Then used three rows of cording where the runnings are to stiffen it (so I didn't use interfacing). I also squared the cape and bonnet up just a bit from your version. I am really pleased with how it turned out. Thank you!

Thanks so much for this tutorial. You are amazing!! I'm glad that you posted this. I'm going to make some aprons and bonnets for the girls for trek, and your tips will really help.

I'm going to give drafting from the original drawing a try. I need to make some type of headcovering for my 7 year old daughter. I am thinking this may be what she needs. She destoyed a straw hat last summer and grew out of another. With a few extra pleats and some good old fashioned hand sewing this should last her for a number of years! Thank you for posting this pattern!

For fun: Here is that bonnet on an American Girl Hopscotch Hill doll.

For a span of five summers, my kids and I were volunteers at This Is the Place Heritage Park (mid 1800s) in Salt Lake City. I discovered I LOVED sewing historic clothing! I didn't want to misplace my research, so I started saving my thoughts, research, and projects on this blog. I mostly help people with trek clothes now, but think it might be fun to become a seamstress at This Is the Place someday when I can think clearly enough, amidst the five kids, to make decisions like that.

I have a lot of links to Elizabeth Stewart Clarks' works, but I'm not so sure they work that great anymore. Sorry. :( If a link doesn't work, you can go to her main site and do a search for what I've referred to for the time being, but most info and free patterns will be found in "The Compendium." Her patterns may be purchased in "The Marketplace."